Bearded Dragon Won’t Eat Veggies? Here’s What to Do 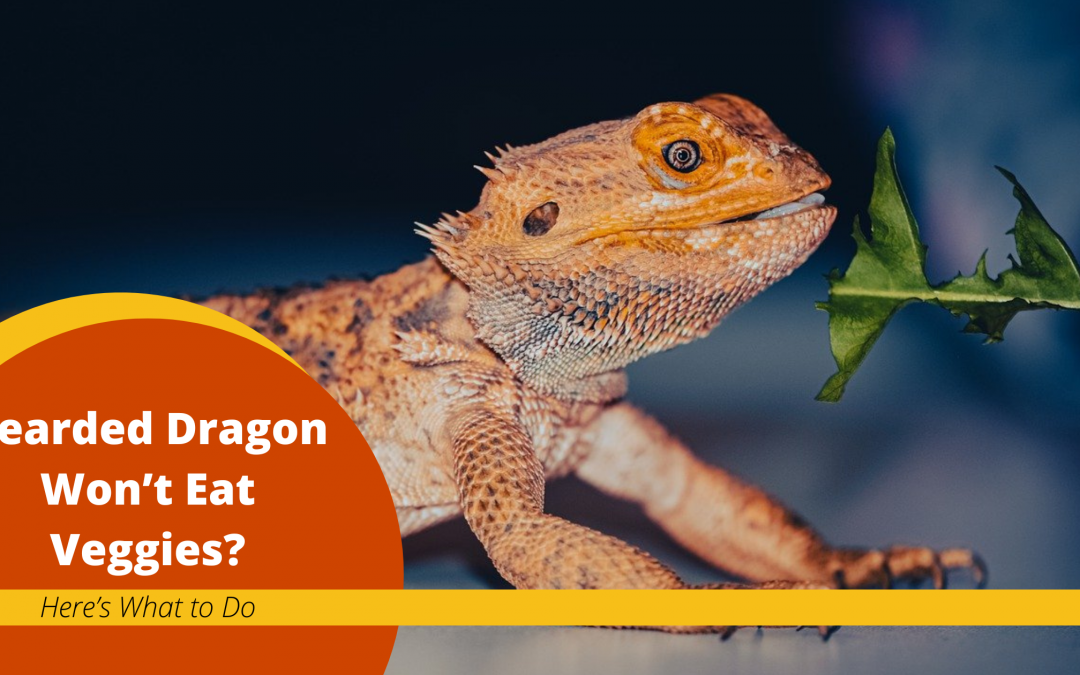 Bearded dragons are the most popular pet reptile and rightfully so! They show tons of personality. We have lazy beardies, hyperactive beardies, sassy beardies, cuddly beardies, etc.

Sometimes your bearded dragon won’t eat veggies. Or anything unless it moves!

It’s a thing beardie owners have to deal with. This can be overwhelming, and we hear you. We want to make sure our little buddies are eating their best even if they don’t want to!

Today we are going to help you figure out why your bearded dragon won’t eat veggies and how to fix it.

Bearded dragons are omnivorous with at least 80% of their adult diet being veggies. It’s kind of crazy to think a bearded dragon won’t eat anything green. But they do and here we are!

Here are some reasons your bearded dragon might not be eating their greens. We’ve also added some tips to fix their diets.

An adult beardie diet is 80% veggies, but a baby beardie is the opposite. A baby bearded dragon won’t eat as many veggies because they don’t need to. They’re busy getting protein to grow big and strong!

The Fix: Give them some more bugs and let them grow! That being said, offer them salads from the start so they get used to seeing veggies. If a beardie grows up having veggies always available they’re more likely to eat them as an adult.

Sometimes beardies eat a few too many bugs. A bearded dragon won’t eat veggies if they don’t have space for them! After around 4 months a beardie should be eating mostly greens.

The Fix: Either cut back on how often you’re feeding bugs or how many bugs are being offered per session. If your dragon throws a fit and refuses to eat anything but bugs then just wait them out and stick to a proper diet. Some beardies are more stubborn than others, but they all have to eat in the end.

Unfortunately, this is a very common reason a bearded dragon won’t eat veggies. Some beardies, especially rescues, have never seen veggies before. Because of this, they don’t recognize them as food.

The Fix: Depending on the dragon this one can be hard. We want to introduce veggies while also making sure the beardie is still eating. Especially if they’re already underweight. Try mixing in food your dragon is already used to eating with the greens. This could be live insects, dried insects, food pellets, slurry, etc.

With unhealthy dragons, some food is better than no food at all. Another trick is to drizzle the veggies with fruit juice. Throw in a few chunks of fruit too. Most bearded dragons enjoy the sugar content and will get as much as they can.

Both heat and UVB are needed for healthy digestion. UVB bulbs should span half of the enclosure and be replaced every 6 months. There should also be a basking spot that’s around 90-110F. If a dragon is missing either or both of these they may not have a lot of energy. That can cause them to lose interest in eating.

The Fix: A) Get a UVB if you haven’t yet and make sure it covers half of the tank. B) If you already have a UVB check to see when it was last replaced, and replace it if it’s been more than 6 months. C) Make sure the basking spot is in the correct range. Provide one if there is no basking spot.

It’s that cold time of year again! Your dragon is settling down for winter to conserve energy. They might even be sleeping and hiding all day.

The Fix: None needed! This is completely normal for beardies and will pass in a couple of months. Just keep on offering food like normal and eventually this will pass. Learn more about brumation here.

The Fix: This one is pretty simple – just keep offering food and take your dragon to a vet if needed.

Every now and then a bearded dragon won’t eat because they’re just stubborn. And a little bored. Beardies have taste preferences too! If you haven’t changed up their menu in a while they might just be sick of the same old thing.

The Fix: Change up the menu! Throw in some color, too. Red, orange, and yellow can be very appealing colors to beardies.  Some of the best greens for bearded dragons aren’t green (though most of them are).

Here’s an amazing list of insects, fruits, and vegetables for bearded dragons. I love this list because it also shows what not to feed your dragon. Not only that, but it recommends how often certain food items should be fed.

If you want to learn more about bearded dragon care then you’re in the right place! We’ve written quite a few blogs on bearded dragon care– and you can read them all here. Topics range anywhere from the basics to making DIY hides.